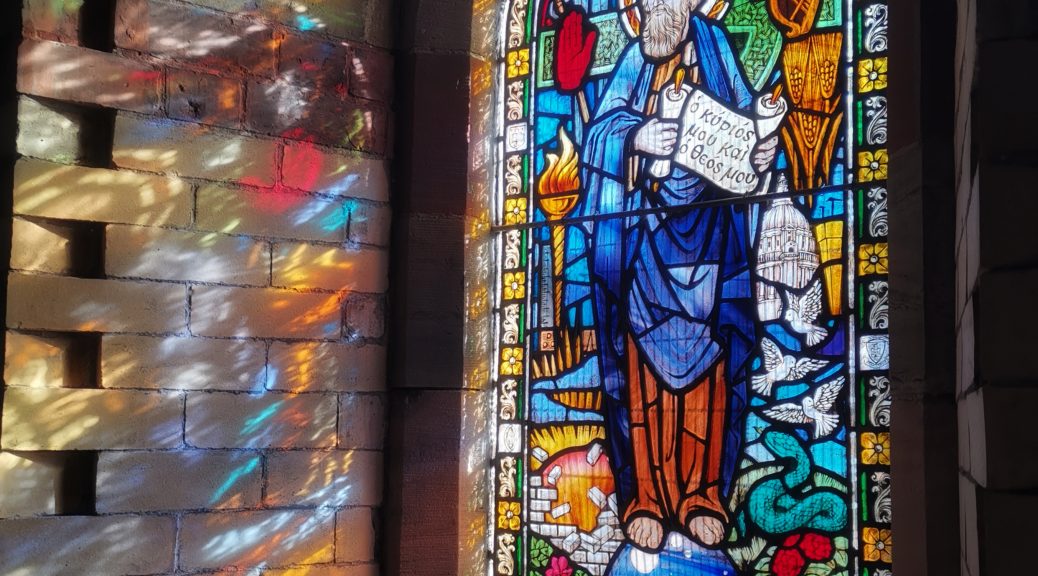 “Jesus Prays for His Disciples”

After Jesus had spoken these words, he looked up to heaven and said, ‘Father, the hour has come; glorify your Son so that the Son may glorify you, since you have given him authority over all people,to give eternal life to all whom you have given him. And this is eternal life, that they may know you, the only true God, and Jesus Christ whom you have sent. I glorified you on earth by finishing the work that you gave me to do. So now, Father, glorify me in your own presence with the glory that I had in your presence before the world existed.

All mine are yours, and yours are mine; and I have been glorified in them. And now I am no longer in the world, but they are in the world, and I am coming to you. Holy Father, protect them in your name that you have given me, so that they may be one, as we are one.

So when they had come together, they asked him, ‘Lord, is this the time when you will restore the kingdom to Israel?’

He replied, ‘It is not for you to know the times or periods that the Father has set by his own authority. But you will receive power when the Holy Spirit has come upon you; and you will be my witnesses in Jerusalem, in all Judea and Samaria, and to the ends of the earth.’

When he had said this, as they were watching, he was lifted up, and a cloud took him out of their sight.

Then they returned to Jerusalem from the mount called Olivet, which is near Jerusalem, a sabbath day’s journey away.

When they had entered the city, they went to the room upstairs where they were staying, Peter, and John, and James, and Andrew, Philip and Thomas, Bartholomew and Matthew, James son of Alphaeus, and Simon the Zealot, and Judas son of* James.

All these were constantly devoting themselves to prayer, together with certain women, including Mary the mother of Jesus, as well as his brothers.

Then they returned to Jerusalem from the mount called Olivet, which is near Jerusalem, a sabbath day’s journey away.

When they had entered the city, they went to the room upstairs where they were staying, Peter, and John, and James, and Andrew, Philip and Thomas, Bartholomew and Matthew, James son of Alphaeus, and Simon the Zealot, and Judas son of* James.

All these were constantly devoting themselves to prayer, together with certain women, including Mary the mother of Jesus, as well as his brothers.

In our lectionary reading from the Gospel of John, Jesus speaks to his disciples, explaining to them that he is going to return to his Father in heaven. As Jesus tells them of his imminent ascension and return to his Father, he tries to reassure his disciples and followers that in the future they will not be alone, for the Comforter, the Holy Spirit which Jesus will send to them will be there for them. In all of this, he prays that they will be protected and have a unity of purpose and be as one.

Jesus’ ascension, his return to the Father, not only marks an important moment in his life and the life of the disciples but it illuminates more of God to us and God’s purposes for us. As we read in Ephesians;

“When he ascended on high he made captivity itself captive, he gave gifts to his people…..  He who descended is the same one who ascended far above all the heavens, so that he might fill all things.”   (Ephesians 4:8-10)

All these readings direct us to visualise a sense of completeness- you have the journey of Jesus from God the Father, to earth, to the cross, to resurrection and now to his ascension; the journey is about God’s purposes of completion and in this the divine relationship between earth and heaven has now been restored to ‘fill all things.” In Jesus, the link between heaven and earth has been made complete, the link between the earthly city and the heavenly city has been accomplished.

And in John’s gospel, as Jesus prays to God, his prayer reflects both dimensions; the dimensions of earthly living, the world now, and that other dimension; that of God’s promised kingdom and heavenly realm, and the synergy that is between them; they are not two but one.

In praying, Jesus reveals that hoped for and promised tremendous sense of connectedness between God, Jesus and all his followers.

“The world does not know you, but I know you; and these (disciples/followers) know that you have sent me” John 17.25

Within this prayer and his words there is for Jesus a sense of seamlessness between God, him and us.  Between heaven and earth. Jesus affirms the interconnection of all these relationships and these places; the complementary realities that we are invited and called to live in. Jesus, in his ascension personifies this.In ascension the resurrected Christ, glorious wounds and all, ascends to the Father, and from the Father’s right hand, the promised Holy Spirit is poured forth to his followers on earth.

The challenge to us in faith is to integrate all of this in a true and living way into our own journeys and lives of discipleship. To understand that our earthly life and the life of our world, is very much connected to a heavenly life.  It’s about learning to incorporate the life of God, the heavenly, the promises and values of God’s kingdom into the everyday.  We are all called to be fully in the middle of our world, shaping it, reshaping it, fussing, objecting to and changing things, practicing love, kindness, hospitality and ironing out the wrongs and injustices. Our job, in a nutshell, is to show the world another path to follow and another way to live; as Eugene Peterson terms it, we are to provide others with a glimpse of good living and the living God! We are called to reflect the love of God the Father to others, as we look forward to experiencing the reality of God’s promised kingdom.

“I made your name known to them, and I will make it known, so that the love with which you have loved me may be in them, and I in them”

“Holy Father, protect them in your name that you have given me, so that they may be one, as we are one.”